Four Seniors Who Rock Honored for their Achievements

Four Seniors Who Rock Honored for their Achievements 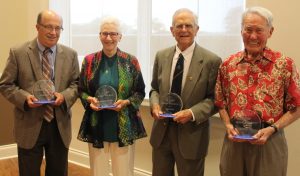 Pro Seniors honored four seniors as Seniors Who Rock at their 4th annual award ceremony, and two of the honorees were graduates of the University of Cincinnati and two were graduates of Xavier University, showing that planting roots can have a wonderful impact on the community.  On Wednesday, August 29th, honorees Marianna Brown Bettman, Dan Hurley, Don Neyer, and Walter T. Oka talked about a quote that has inspired them and kept them rocking.

Bettman is the first woman who was elected to the Ohio First District Court of Appeals, a Professor of Practice Emerita at the University of Cincinnati College of Law, and Legally Speaking Ohio blogger.  She talked about, “what’s worth doing is worth doing well.”

Hurley is a historian and founder of Applied History Associates, the former host of Local 12 Newsmakers and former director of Leadership Cincinnati.  Hurley is inspired by a quote from Lynn Meyers from the Ensemble Theater of Cincinnati: “You can teach society better from a stage than from a pulpit.”

Neyer is a retired real estate developer and contractor, SCORE counselor, and active volunteer.  He believes in having a PMA, Positive Mental Attitude to love all and serve all.

Oka is a World War II veteran, retired medical technologist, Aikido instructor, and frequent presenter.  His quote, “Go for broke,” was the motto for the 442nd Regimental Combat Team that he was a part of during World War II.

The proceeds from the event help fund Pro Seniors’ Legal Hotline, which provides free legal advice to any Ohioan who is 60 or older.  Thank you to everyone who supported the event.  And thank you to our Band Sponsors: Al. Neyer, Friends of Rocking Marianna Bettman, and The Yunker Group.  We so appreciate your dedication to our clients.