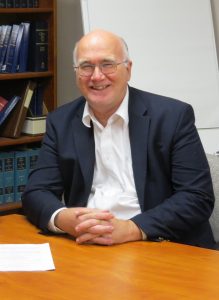 On April 21, 1986, Bill Hambley arrived 15 minutes late for his first day of work at Pro Seniors.

Janet Pecquet, an attorney with Pro Seniors at the time, was a little relieved. During the interview, Bill seemed too good to be true. He had been working at the Appalachian Research and Defense Fund in Kentucky, a well-known legal aid organization. He had done impactful work, including advocating for improved jail conditions. The only time Bill had taken off for illness was to donate his kidney to his brother. (Even today, when Bill is going to see his brother, he jokes, “I’m going to visit my kidney.”)

In the interview, Janet challenged Bill to stay at Pro Seniors instead of using it as a “stepping stone” to the next job. Whether Bill had plans to move on or not isn’t clear. What is clear is that his almost 32 years of work at Pro Seniors have had a tremendous impact.

Bill is a respected Medicare expert, and he has dedicated his life’s work to legal aid, providing access to justice to the most vulnerable people. His work has included litigation to protect resident rights, securing access to healthcare for low-income seniors, and ensuring veterans receive the benefits they earned. And there are the many, many clients: women and men who were denied coverage or billed exorbitant fees for needed healthcare. Bill has remained focused on them and has quietly championed for their rights.

And he did it by drinking tons of White Castle coffee and by doggedly staying informed about Medicare. He is known for his research tenacity. If there is information out there, Bill will find it. In a ruling on a motion for attorney fees, Chief Judge Carl Rubin described Bill’s research on an appellate brief as “lavish thoroughness.” The Judge also said the outcome was excellent and helped “untold other residents of nursing homes in Ohio.”

In the office, Bill is known for his quick wit, affable good humor, and love of coffee, salads, and fried chicken. He is incredibly patient, fielding questions from other attorneys and ombudsmen about Medicare.

Bill is one of the best: down-to-earth, generous, hard-working, and kind. He and his wife Sue have built a good life in Kentucky, raising two children and caring for a cat named Stripedity Pants and a rescue dog, Gypsy. They went on lots of camping trips as a family, and Bill likes planting trees. He also loves Shakespeare and quotes Sir Walter Scott: “Oh! what a tangled web we weave/When first we practise to deceive!”

Years ago during strategic planning, Bill said that we should describe what we do at Pro Seniors by saying that we do it “zealously.” A co-worker objected, saying “zealously” had a negative connotation. That co-worker now says, “Bill was wise. We do work zealously because we are passionate and care about the work.” That is exactly what Bill has been like for decades at Pro Seniors: passionate and caring, seeking justice, protecting the rights of Ohioans, and doing impactful work.